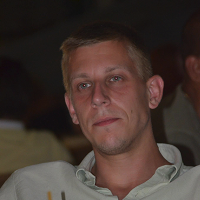 A seasoned, engineer and team lead.
A wide range of experience, with a recent focus on building internal developer platforms and affecting cultural change in Financial Services

I helped to grow the team from 2 members to 5 as we supported a larger tech organisation and increased our responsibilities.

We focussed on building an internal developer platform, cementing the guarantees and constraints of our platform for a large number of developer teams.

It was decided that the Jenkins X platform wasn’t a strategic option for us, and so we looked to replace Jenkins X, eventually choosing Harness CI.

Working to adopt and improve cloud native practices across the tech department.

Lending expertise on microservices, cloud native development, testing in a CD pipeline, and application security. Facilitating the migration of a small estate of microservices from EC2 instaces to containerised workloads in Kubernetes.

Our team took ownership of much of our CI/CD toolset, based on Jenkins X, and began to expand its capabilities.

I moved to FinKit as it was a small team Test lead working across multiple teams, working toward a next generation banking platform. We aim to accelerate financial institutions with continuous deployment, modern architectures, baked in governence and compliance.

I joined Nagra where I was embedded in a scrum team to improve testing of their MediaLive JavaScript API.
There I wrote a karma-compatible test framework to replace a legacy headless approach. Due to some poor practices baked into the API contract, the framework was built to support isolated execution environments per test/suite by executing test contexts within iframes.

Shortly after I took over a colleague’s responsibilities for testing of Nagra’s white label UI.
The approach was Cucumber BDD tests for a WebDriver backend. I extended and refactored the test suite for more comprehensive browser and functional coverage, as well as moving toward a cleaner business language when describing the tests.

The two teams merged, and we went on to hire two junior QAs that I mentored.

Although limited in its scope, it was here that I was first able to break down the “over the wall” mentality toward QA and to help contribute to my team in shifting toward (what is now widely known as) a DevSecOps culture.

After moving back home to South Wales I joined GoCompare as a test analyst.
I found myself supporting our marketing team with their efforts to move to a new CMS, in addition to performing a range of QA functions for the project.

I was involved with all aspects of QA at GoCompare, as well as contributing to the resolution of high priority incidents

At Sophos I was the lead test engineer for the company’s Cloud based Unified Threat Management (UTM) offering.
The software was built for a variety of devices, from embedded Linux routers to real time operating systems, on x86, ARM, and MIPS.
I helped to build, market, and sell the software to medium and large cap networking vendors.

I also worked with the core engine team to deliver and improve QA for the virus engine, anti-virus suites, and Data Leakage Prevention products.

A barman for a busy student pub in Heslington, York.
The high point of my career, it can only go downhill from here.

I studied computer science at the University of York, graduating with honours.
My dissertation was entitled “A JIT Compiler for YHC Bytecode” which explored implementing a fast throwaway Just In Time compiler for the York Haskell Compiler.

The simple and aging technique for JIT compilation showed impressive performance whilst adding only a few KiB of binary size and only constant memory overhead.
Had I taken the project further, it would have been interesting to evaluate its usage in memory constrained environments.